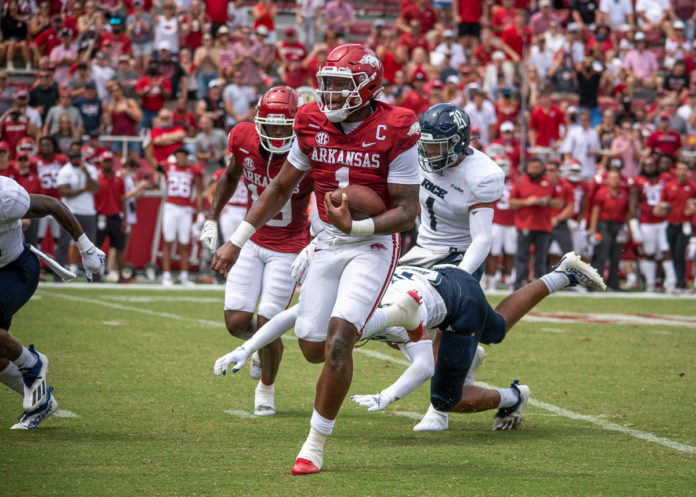 The Arkansas Razorbacks opened up the 2021 season vs their old SWC foe, the Rice Owls. On the Hogs’ 2nd drive, quarterback KJ Jefferson drove the team down the field for the first touchdown of the season on a 34 yard keeper to go up 7-0. Rice would go on to score a field goal and tacked on a 1 yard touchdown run by Jordan Meyers late in the 2nd quarter. Rice led at halftime 10 to 7.

Rice opened up the 3rd quarter with a 41 yard touchdown pass from Wiley Green to August Pitre III to go up 17-7. Arkansas responded by scoring on 5 of their last 6 possessions. KJ Jefferson scored again on a 5 yard keeper. Kicker Cam Little tied the game with a 34 yard fg. Then runningback Trelon Smith found the endzone from 5 yards out. Tyson Morris caught a 9 yard pass to put the Hogs up 14 with just over 4 minutes left in the game. Then the Hogs put the finishing touches on the game with a Dominique Johnson 3 yard touchdown run.

Defensively, the Hogs lost their 2 starting linebackers to targeting calls. Grant Morgan was ejected in the first quarter. In the 2nd half, Bumper Pool was ejected and will miss the first half of the Texas game next Saturday. Jalon Catalon had 2 interceptions with 83 total return yards and Montaric Brown also had an interception for a 5 yard return.

Arkansas hosts former SWC, and future SEC foe, Texas at 6pm. The game will be televised on ESPN.